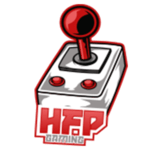 The rules set by HFP Gaming are intended to maintain the competitive quality and high level of the league. Failure to comply with the rules may lead to the penalties listed in the rule book or to the exclusion of players and members from the social media of the community and the leagues it conducts.